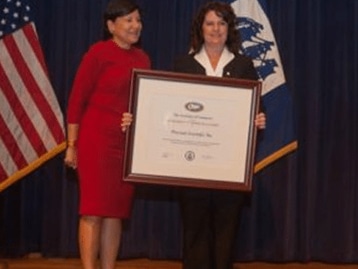 posted on May 17, 2016 by Percival Scientific in Plant Growth

May 17, 2016 – Perry, Iowa — U.S. Secretary of Commerce Penny Pritzker yesterday presented Percival Scientific, Inc. with the President’s “E” Award for Exports at a ceremony in Washington, DC. The President’s “E” Award is the highest recognition any U.S. entity can receive for making a significant contribution to the expansion of U.S. exports. Percival Scientific was the only Iowa company to receive an award.

Percival Scientific has demonstrated a sustained commitment to export expansion,” said Secretary Pritzker in her congratulatory letter to the company announcing its selection as an award recipient. “The “E” Awards Committee was very impressed with Percival Scientific’s customization of its product line to fit the needs of customers in export markets. The company’s creation of export supported jobs was also particularly notable. Percival Scientific’s achievements have undoubtedly contributed to national export expansion efforts that support the U.S. economy and create American jobs,” said Pritzker.

Percival Scientific, Inc, with roots in Iowa as far back as 1886, designs and manufacturers plant growth chambers, biological incubators and special application research chambers for universities, government institutions, biotechnology companies and private corporations. Percival products are found in all 50 states and in over 79 countries worldwide.

“Exporting continues to be the foundation of our sales growth, and we are honored to receive the “E” Award,” said Joni Campidilli, Vice President, Sales & Marketing. “Percival has been able to weather the economic downturns in the U.S. with the increase in our international business. The advantage Percival has had over the years is the ability to be flexible in our product design to adapt to the fluctuation of product demands.  Our export business represents 50% of our total sales, enabling us to sustain jobs and even expand our workforce.”

In 1961, President Kennedy signed an executive order reviving the World War II “E” symbol of excellence to honor and provide recognition to America’s exporters. Secretary Pritzker honored 123 U.S. companies with the President’s “E” Award for their outstanding work to reduce barriers to foreign markets and to open the door to more trade around the world.

U.S. companies are nominated for the “E” Awards through the Department of Commerce’s U.S. Commercial Service office network, located within the Department’s International Trade Administration, with offices in 108 U.S. cities and more than 70 countries.  Record years of successive export growth and an applicant’s demonstration of an innovative international marketing plan that led to the increase in exports is a significant factor in selecting the winners.

For more information about the “E” Awards and the benefits of exporting, visit www.export.gov.