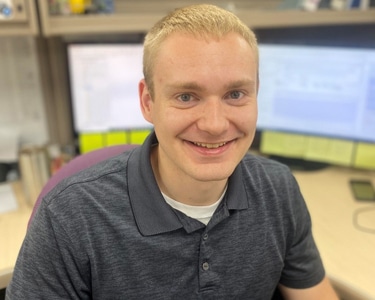 posted on June 29, 2020 by Kris Winter in Uncategorized

Ryan Beymer started at Percival in July 2017 as a Design Engineer Intern and a few months later was hired on full-time as a Design Engineer. This is his first job out of college. He graduated from Iowa State University with a degree in Mechanical Engineering.

As a design engineer Ryan processes chamber sales orders which include preparing the electrical and refrigeration systems, diagrams, designing the chambers themselves along with creating the bill of materials. This is all done before the chambers are actually manufactured and built in Percival’s factory. Ryan mainly focuses on the larger projects and environmentally controlled walk-in rooms – which are highly customized for each customer.

Ryan says what he loves most about working at Percival is, “With the design of walk-ins, almost every chamber is new in some way.”  He goes on to say that he has, “… the freedom to shape the design on what I think is best with input and feedback from other engineers and production workers.”

When Ryan isn’t at work, he enjoys staying active and being outdoors when the weather allows for it. Camping and fishing are two activities that you’ll find him doing, especially in the summer months. Ryan also likes working out and playing video games.

Thank you Ryan for your years of hard work and dedication to Percival Scientific and helping Create Better Science!

Fun Fact: His favorite food is steak and favorite color is red. Ryan says if he could travel anywhere in the world right now, expenses paid and no additional worries, he would travel to Norway. “I love mountains and nature sightseeing! The Scandinavian countries always looked beautiful.”