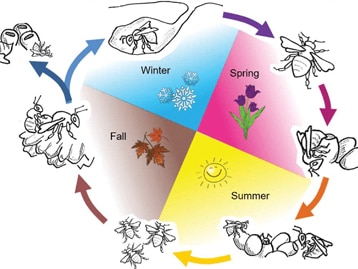 posted on March 15, 2019 by Kris Winter in Uncategorized

One size does not fit all: Caste and sex differences in the response of bumblebees (Bombus impatiens) to chronic oral neonicotinoid exposure

This research article was originally published in the Pos One Scientific Journal by authors Melissa W. Mobley and Robert J. Gegear in the Department of Biology and Biotechnology, Worcester Polytechnic Institute, Worcester Massachusetts.

Bumblebees have rapidly declined in abundance, species richness, and geographic distribution on a global scale over recent years. In North America alone, nearly half of the bumblebee species have reached historically low numbers including one species, Bombus affinis, which was recently listed as an endangered species by the U.S. Fish and Wildlife Service. From an ecological perspective, these declines pose a significant threat to the function and diversity of temperate ecosystems due to the critical keystone role that bumblebees play as pollinators of native flowering plants. Reports of parallel reductions in bee-pollinated plant species suggest that pollinator decline-mediated effects on wildlife diversity at higher trophic levels may already be well underway. It is therefore imperative that all anthropogenic stressors contributing to species decline in bumblebees be identified and mitigated as soon as possible.

One stressor thought to contribute to wild bumblebee decline in urban and agricultural areas is a newly developed class of pesticides called ‘neonicotinoids’. Despite these benefits, neonicotinoids pose a significant threat to beneficial insects such as pollinators because they are translocated to floral nectar and pollen, presenting a route of oral exposure. Of particular concern to wild pollinator populations is the fact that neonicotinoids can be transported away from the area of application to adjacent natural areas and then contaminate wildflower resources

Yet, the overwhelming majority of neonicotinoid toxicity studies on bumblebees to date have focused only on the colony stage, relying on metrics such as worker survival, larval growth, and reproductive output to estimate the potential impact of exposure on wild populations. While such colony-focused risk assessment protocols may be adequate in the context of crop pollination, determining the impact of widespread neonicotinoid use on threatened bumblebee species in an ecological context requires more comprehensive assessment protocols that consider potential impacts on queens and males, whose survival during mating, overwintering, and nest establishment stages of the life cycle has a direct effect on population stability.

For chronic oral toxicity tests, queen, worker and male bees were collected and placed in a 4˚C refrigerator. Once immobile, individuals were weighed to the nearest milligram, marked with acrylic paint for identification, and then placed in a 16oz plastic housing container with a screen lid for ventilation. All housing containers were kept in Percival Scientific environmental chambers set to 22–25˚C, 50% humidity, and a 12 hour light/dark cycle.   Read the full study here.