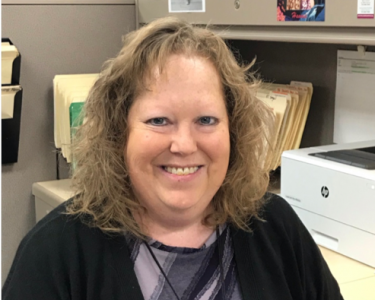 posted on December 11, 2019 by Kris Winter in Uncategorized

Sue Sharp began working at Percival Scientific in 1986, starting out in the purchasing department. During those 33 years, she’s had a number of different roles with the company including HR and Benefits Coordinator. Currently, Sue is the company’s Administrative Assistant.

With that said, working in administration isn’t the field Sue initially started with. Throughout high school and college she actually worked at a local nursing home in her hometown of Boone, Iowa. (Prior to being based in Perry, Percival Scientific’s factory was actually based in the city of Boone – which is roughly 30 miles from where the company is now.) She graduated from the Administrative Secretarial Program from DMACC in Boone and completed her internship in the purchasing department at Iowa State University. Shortly after, Sue landed a job with Percival.

“It has been neat to see how the company has grown in the 33 years I have been here, both with technology and a new building,” Sue says. She’s made many friends over the years and has, “… enjoyed working with so many people that are dedicated to their jobs and the success of the company.”

Outside of work, Sue and her husband Bill are avid travelers who enjoy going camping on the weekends when the weather is nice. She also loves gardening and spending time with family and friends. In the fall, you can catch Sue attending Iowa State University football games in Ames cheering on the Cyclones!

Thank you, Sue, for your years of hard work and great dedication to Percival.  We appreciate you and all that you do!