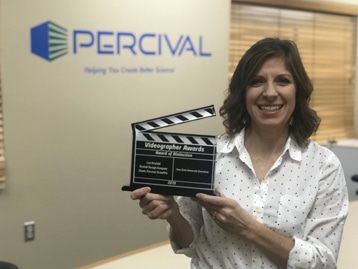 posted on October 9, 2019 by Kris Winter in Plant Growth

Percival Scientific, in partnership with Lori Drafahl of Drafahl Design Company, received an Award of Distinction from the Videographer Awards for a video featuring Percival’s partnership with Iowa State University on a climate change project called Enviratron.

The Videographer Awards is one of the most notable award competitions in the video industry, with entries from 13 countries. It is administered and judged by the Association of Marketing and Communication Professionals, a preeminent third-party evaluator of creative work consisting of several thousand marketing, communication, advertising, public relations, media production and free-lance professionals. Judges are industry professionals who look for companies and individuals whose talent exceeds a high standard of excellence and whose work serves as a benchmark for the industry. The Award of Distinction is awarded for projects that exceeded industry standards, and only 15 percent of approximately 1,500 entries receive this award.

Percival Scientific Vice President of Sales and Marketing Joni Campidilli says the Enviratron story was one that needed to be told visually. “This project is a first of its kind, and Percival has been collaborating with Iowa State University on it since the proposal stage,” she says.

Percival custom-designed plant growth chambers that work in sync with Iowa State’s Enviratron robotic rover, which independently records data about the plants inside the chambers. Iowa State continues to work closely with Pericval to make needed updates or modifications as research progresses.

“It’s been thrilling to watch the vision for this project become reality,” says Campidilli, “and you get a fuller appreciation when you see the rover in action with the chambers.”